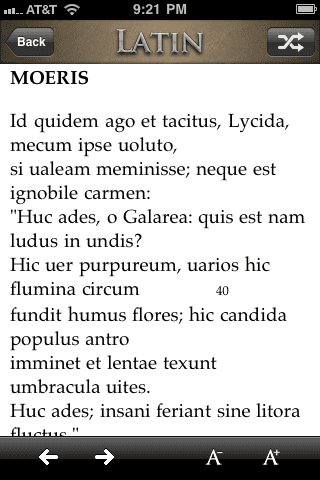 I recently decided to purchase an iPhone app called SPQR. The program is supposed to be a reader for popular Latin texts with English translations, along with Lewis & Short and Whitaker's Words, as well as some other tools. Based on the reviews published on romansgohome.com I fully expected my experience to be equally positive. However, I am saddened to report that most, if not all, expectations for the app have not been met. On the whole, the relatively high price ($5.99) creates a false assumption that the program is both rich in features and these features are well implemented. Perhaps the mere number of features is satisfactory, but as far as implementation goes, there are too many problems. In my opinion, the program is still in beta version. I shall explain.

As it stands now, I have payed six dollars for an app that is not even usable. I could simply download a bunch of public domain ePubs on my iPhone and get all the benefits of well designed free book readers (I already have a L&S app). It would be great to find out that a new version of the program will be released soon, and that all necessary features will have been implemented, and then some. So far, it looks like this time around the Romans really did go home. If you intend to help out the developer of SPQR, go ahead, but if you are saving your lunch money for a quality app, I would not recommend this one.