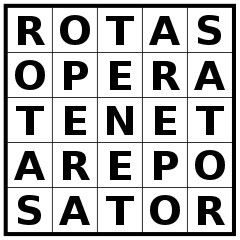 This very famous palindrome, written into a square, is usually interpreted in such a way that rotas is taken as Accusative Plural of rota 'wheel'. We then get something like this: "Sower Arepo holds the wheels of work" (literally, I think, opera is some kind of retained Accusative). What agricultural meaning is hidden in this phrase? Hard to say. I think that in this case, as it often happens with philological toys of this sort, we are trying to get away with having at least a hint of a meaning, all for the sake of the art, so to speak. It is not surprising then that a late medieval work by Christanus Campililiensis 'Tractatus de uersibus' this palindrome is given in this form, making it impossible to fit it in a square:

Ecce here is a part of the palindrome! The magic gets lost. It's as if the author of this work was unaware of the Arepo square.

And this, among other things, makes me believe that ROTAS is actually not a part of the sentence, but an instruction built into the palindrome, meaning 'you turn /this/ around.' Interestingly, the agricultural metaphor is preserved, because the sentence is still reminiscent of boustrophedon, the movement of oxen in a plough, changing the direction after each pass.

Also, I have received a comment reminding me that the "Sator arepo" square has been interpreted to be the encoded Pater noster prayer, with the addition of just two letters: Alpha and Omega. I have not been able to verify this yet.