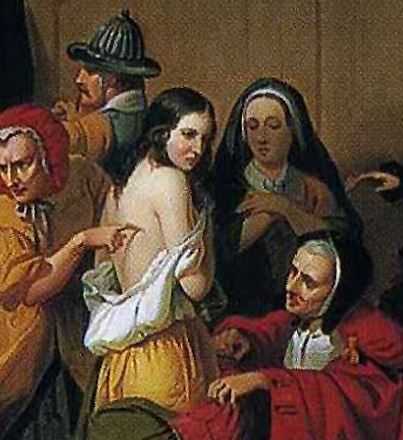 Here is a somewhat amusing Latin-related anecdote about the time directly preceding the Salem Witchcraft trials of 1692. A bit of a twist on the medieval designation of Latin, Greek and Hebrew as the only languages worth learning.

In 1688 Cotton Mather, a well-known New England Puritan minister, dealt with a case of alleged witchcraft in Boston. Among the afflicted was a girl whose condition became particularly severe. Charles Wentworth Upham relates this story in "Salem Witchcraft: With an Account of Salem Village and a History of Opinions on Witchcraft and Kindred Subjects":

"After some time, Cotton Mather took her into his own family, to see whether he could not exorcise her. His account of her conduct, while there, is highly amusing for its credulous simplicity. The canning and ingenious child seems to have taken great delight in perplexing and playing off her tricks upon the learned man. Once he wished to say something in her presence, to a third person, which he did not intend she should understand. He accordingly spoke in Latin. But she had penetration enough to conjecture what he had said: he was amazed. He then tried Greek: she was equally successful. He next spoke in Hebrew: she instantly detected the meaning. At last he resorted to the Indian language, and that she pretended not to know. He drew the conclusion that the evil being with whom she was in compact was acquainted familiarly with the Latin, Greek, and Hebrew, but not with the Indian tongue.