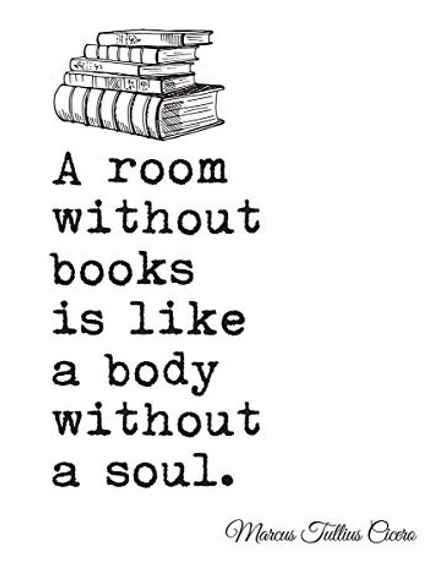 At one time Amazon.com, during the early years of the multi-billion enterprise when they were nothing but a bookstore, used to include refrigerator magnets in shipments to customers, bearing a quote attributed to Cicero: A room without books is like a body without a soul. Coffee mugs, bookmarks, cards and other items with this quote also reportedly exist. Occasionally, this adage is attributed to G.K. Chesterton. Holbrook Jackson in his inspiring "Anatomy of Bibliomania" invites the reader to 'agree with Cicero' on this precise point making a reference to Lubbock's "Pleasures of Life" (published around the time when Chesterton was barely out of grade school). Lubbock, however, only informs us that "Cicero described a room without books, as a body without a soul." In all likelihood, what he has in mind is a phrase from Att. 4.8:

postea vero quam Tyrannio mihi libros disposuit, mens addita videtur meis aedibus ("since Tyrannio has arranged my books for me, my house seems to have had a soul added to it".)

(it is also possible that Lubbock used a secondary source). Thus, the neatly worded quotation from Cicero dissolves into thin air. It is amazing how it's possible that in this day and age, a quote so dubious in its attribution can be passed off as a genuine item. At best, it expresses a sentiment to which Cicero would have subscribe, but not his true words (and he was good with words, you know).

The fact is that the saying itself is not that bad. It's just a shame that we cannot attribute it to someone else. Really, would it have killed Cicero to say something to the same effect? I'll tell you why he didn't.

Books simply did not mean to Cicero what they mean do to us (those of us who read books, anyway). He did not have to be in direct contact with the learned tomes of his time. That's what slaves were for. They copied books, read them out loud and organized them. A writer of Roman times was rather detached from his media. You could be a man of letters and never pick up a calamus. Or a book, for that matter. And even if one wanted to use books it was not that easy. You simply could not simply crack open a volume and find a quote that you needed or verify some idea. It would take many minutes of attentive scrolling. Dealing with books was akin to manual labor, something that a free Roman would rather not be a part of. So, even if you were into literature you would not hold books in a particularly high esteem, methinks. It may appear odd, but there is a reason why the term for a scribe, Librariolus, is reminiscent of the contemptuous Graeculus.

A Roman man of letters inevitably remained less involved with books as physical objects of intrinsic cultural significance, often dealing instead with their mental projections. These projections were associated with rather fluid textual data, because the limited ability to open a papyrus on any given passage and the lack of visual contact with books during recitation stood in the way of developing the very notion of textual integrity. Perhaps, the appeal of the pseudo-Ciceronian adage is due to the fact that for us 'a room with books' has a deeper meaning ' that of a multidimensional microcosm where myriads of definitive semantic streams can be instantly reached, consulted and analyzed. This distinction setting apart the ancient and the modern worlds of books may seem too subtle, but one only needs to imagine the frustration that would occur if all the pages in someone's library were suddenly glued together to form scrolls. Would we still consider that room full of books?

To put it simply, the comparison of books in a room with a soul in a body only works well with books as we know them.