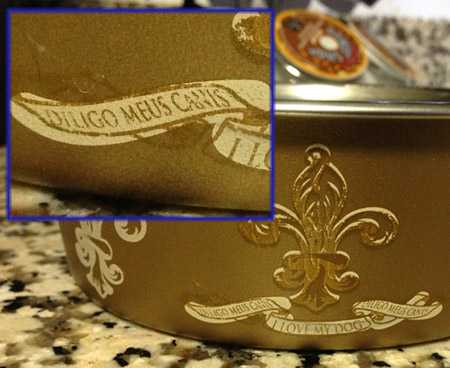 Bought this the other day without looking too closely. Nice fleur-de-lis bowl. Imagine my surprise when I realized that this object proudly displays a small heraldic achievement with this motto: Diligo meus canis - Love my dog - Diligo meus canis. If you know any Latin at all you should notice two glaring grammatical errors. Meus and canis are taken in their standard dictionary forms, as is diligo, but the gods of Latin smiled upon the creators of the bowl, because the dictionary form for verbs just happens to be grammatically correct in this context... Diligo meum canem would be much better. As ridiculous as Google Translate is, it would have produced a much more acceptable result. Also, why Latin?

I actually got this for a cat, so it's even less appropriate. Sure hope nobody was inspired to make this failed motto into a tattoo.